What is the Endocannabinoid System? – MediPharm Labs 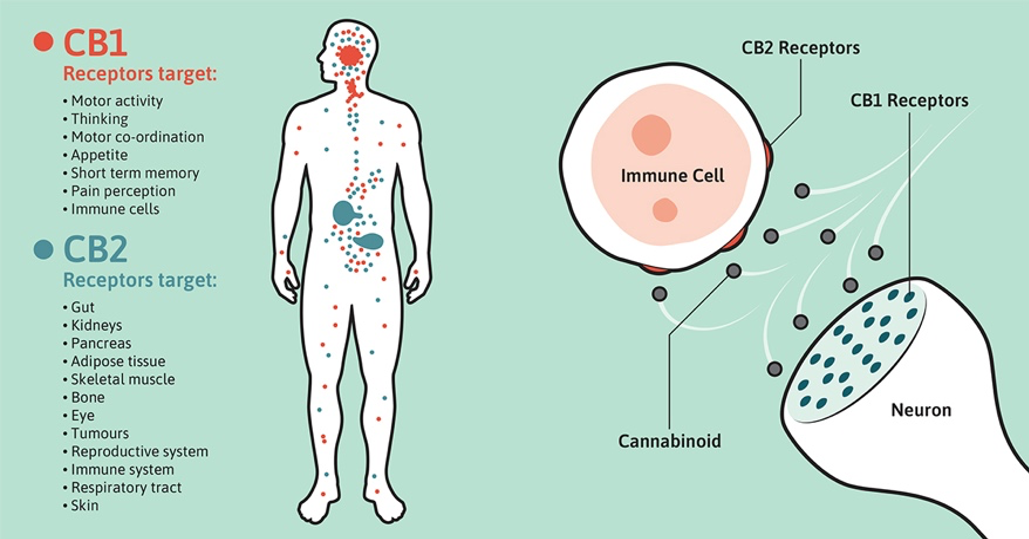 A System with History – Ancient and Modern

28 million years ago, on the plains of central Asia, a plant that would one day become known as Cannabis Sativa L. set out on its own unique evolutionary path[1]. 10,000 years ago, according to archeologists’ findings, early human inhabitants of Central Asia buried hemp fibre and seeds with their dead. 3,000 years later, cannabis was first used as a medicine in China.[2] Finally, in 1988, the endocannabinoid system was discovered by researchers at the St. Louis University School of Medicine[3], and we began to have a clearer idea of why and how cannabis affects human beings the way it does.

A System with Ins and Outs

The endocannabinoid system is a major neurotransmitter system that is comprised of receptors and their cognate small molecule binders. The system responds to endo (inner) cannabinoids that our own bodies produce. The ECS is believed to be a homeostatic regulator for many physiological processes in the nervous system and in peripheral organs. These processes are involved in appetite, pain sensation, mood, memory, inflammation, insulin sensitivity, and fat and energy metabolism – to name just a few. The ECS, in a very real sense, keeps us balanced.

How is it that the compounds produced outside our bodies by the cannabis plant are able to hook into the ECS system the way endocannabinoids do?[4] To date, no-one knows for sure – the only certainty is that they can connect. And, when they connect to the ECS receptors, these external cannabinoids, known as phytocannabinoids, can produce their own potentially therapeutic effects in our bodies and minds. Tetrahydrocannabinol (THC), the first phytocannabinoid to be discovered, has been found to be medically useful as an analgesic and a sedative[5]. However, outside the laboratory, it’s probably more well-known for its psychoactive properties, which can create the euphoric sensations associated with cannabis. Cannabidiol (CBD), another cannabinoid found in abundance in cannabis, has both anti-inflammatory and anti-anxiety properties, and is better known for its medicinal qualities.[6]

All vertebrates, including mammals, birds, reptiles and fish, have endocannabinoid systems.  Although early research suggested that cannabinoid receptors were found exclusively in the brain and nerves, it turns out that they are prevalent throughout the entire body. They exist in our skin, immune cells, bones, fat tissues, liver, pancreas, skeletal muscles, heart, blood vessels, kidneys, and gastrointestinal tract.[7]

So, it’s no coincidence that the possible “balancing” effects of the ECS extend to so many of the critical processes that go on in our bodies and brains. According to a recent Health Canada report, the ECS has been tied to the healthy function of "…nervous system development, immune function, inflammation, appetite, metabolism and energy…cardiovascular function, digestion, bone development and bone density, pain, reproduction, psychiatric disease, psychomotor behaviour, memory, wake/sleep cycles, and the regulation of stress and emotional state/mood."

A System that Keeps Us Healthy

One of the ways that the ECS keeps so many metabolic processes on an even keel is by adjusting the mixture of the endocannabinoid molecules that it chooses to welcome through its receptors. Two of the most famous of these molecules are known as anandamide and 2-arachidonylglycerol (2-AG)[8]. The ECS modulates the relative amounts of anandamide and 2-AG, as well as other molecules, to produce a desired response at a given moment. An intriguing hypothesis is that a combination of cannabinoids (endo or phyto) may have a different and more pronounced effect than the single molecules in isolation.

"The ECS is a major neurotransmitter system that remained relatively unknown until the last few decades," says Dr. Tait Gale, Manager of Research and Development at MediPharm Labs. "It's a profoundly complex orchestra of moving parts, and I'm always surprised by the extent of its involvement in so many physiological processes in the nervous system and the peripheral organs. Many private and public initiatives are now underway - particularly in Canada - to learn more about the ECS and how the repertoire of phytocannabinoids interact with it. The next few years are going to be very illuminating!"

MediPharm Labs specializes in the extraction and distillation of abundant cannabinoids like THC and CBD, but is also working on the isolation of CBN, CBG, THCV, and other minor cannabinoids. For the creation of consistent, chemically-precise combinations of cannabis compounds, the standards to which MediPharm Labs adheres are extremely important.

To learn more about extraction at MediPharm Labs, visit medipharmlab.com.