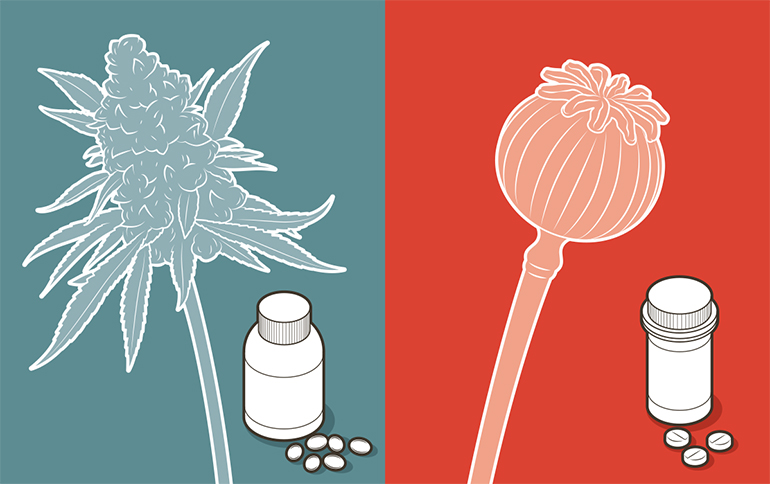 Miriam McDonald, current Director of Pharmacy at Health Sciences North (Northern Ontario’s largest hospital) and past Executive Director of Community Development at the Northern Ontario School of Medicine, is also a member of the Science Committee.

How did you become interested in the clinical effects of medical cannabis?

Cannabis has been available for medical purposes through special authorization for many years, with some forms of recreational cannabis becoming legal in Canada in October 2018. As such, I’ve always been aware of it as a pharmaceutical agent and certainly have known about its interaction with the body’s existing endocannabinoid system through receptors. The endocannabinoid system is a signalling system found in all vertebrates with regulatory functions throughout the body and responds to its own internally synthesized “cannabinoid” substances as well as external “exogenous” cannabinoids. Recently, advances have been made in understanding specific features of the system, just as has happened with the endorphin/opioid system which interacts with opioids.  Both systems include their own internal, endogenous receptors, which can channel natural compounds we produce in our own bodies. and both also respond to external, exogenous compounds - opioids in the endorphin system and cannabinoid molecules for the endocannabinoid system.  Endocannabinoid and endorphin receptors have been found to show similar types of protein composition and enzyme activity with some spatial overlap. With the ability that both systems have to modulate pain, researchers now believe that there is crosstalk between the two systems. Anatomical, biochemical and molecular studies support reciprocal interactions between the endocannabinoid and endorphin (opioid) systems.

Since its discovery in the early 1990s have most Pharmacy programs included the endocannabinoid system in their curriculum?

They have to an extent, and increasingly so since the Cannabis Act which legalized recreational cannabis in 2018. The Ontario College of Pharmacists has also moved to make knowledge of cannabis fundamentals mandatory for continued licensure in 2020.  The focus is to offer patients guidance and education in ways that are informative and non-stigmatizing at all times.

Yes, certainly, cannabinoid substances are not new. This is a 5,000+ year-old “medicinal” we’re talking about. It wasn’t just used; it was used extensively throughout history and re-introduced in the 1800s. And a lot of famous people availed themselves of it. The story of Queen Victoria using it is one of my favourites.1

Cannabis only went underground with the prohibition measures taken in North America in the 1920s and ‘30s.

Are you familiar with the name Emily Murphy, AKA Janey Canuck, the Canadian suffragette who campaigned fiercely against cannabis in the ‘20s?

Absolutely. She was probably the main reason cannabis became illegal in Canada in 1923, 15 years before it was made illegal in the States. What you may not know is that the Medical Association was against making it illegal at the time in Canada.

Yes.  Because, at the time, cannabis was a standard on pharmacy shelves. Which is why I’m glad to say that, today, we have a mandatory program on cannabis education for all Ontario pharmacists, which stresses the importance of not only assisting patients in their understanding of cannabis use but also keeping up with cannabis and cannabinoid research.

For pharmacists, new knowledge means knowing the pharmacology of the endocannabinoid system. Besides completing Pharmacy at the University of Toronto, I also took a Masters of Science in Pharmacology at Queen’s University. It involved learning and researching fundamental neurochemical receptor systems in more depth.

When medical cannabis was legalized, could pharmacists dispense it?

There was legally authorized medical cannabis, of course, long before October of 2018, when recreational use became legal as well. But pharmacists could not dispense cannabis in the early days and, to date, they still cannot. Medical cannabis is supplied by medical sales licence holders, not through a prescription, but via an “authorization” (medical document) sent by their clinic’s physicians or nurse practitioners to the licensed producer. The patients/clients receive a confirmation receipt from the seller which allows them to order within their medical document restrictions and receive product via registered mail.

In hospitals, we have protocols to allow patients to use their personal supply of authorized cannabis. Due to “no smoking/vaping” policies, they cannot smoke or vaporize, but other methods of consumption are acceptable. Throughout, pharmacists are involved in educating individuals to minimize risk by monitoring interactions with other drugs and reviewing adverse reactions.

In your personal experience, were the stories you heard from people about the efficacy of medical cannabis generally positive?

I think everyone will tell you that patients who require medical cannabis report various degrees of utility in it. But, it’s also important to echo what Dr. Hance Clarke at University Health Services said (speaking of CBD use for pain relief) is that this is one of the first times in Canadian history where a medication has made it to the population without the science leading us there. 2The evidence has not caught up to the story that’s in the public. We have a medication that has been approved for not only medical, but recreational use, without the science being fully in place. Science needs to catch up. We’ve got a cascade of enthusiasm. We need a cascade of science.

Because there are hundreds and thousands of stories about people who are struggling with all types of illness, with pain or anxiety or inflammation, who are hoping that cannabis might be able to help them. When we can’t meet their needs with prescription products, people try other things. We need to honour that and not stigmatize; you can’t interact with patients without an open mind.

We have to find the products that might help patients, and promising research results are happening all over. Our government review group, the Canadian Agency for Drugs and Technologies in Health, has reviewed studies. In this past year alone, they documented3 that there is some indication that cannabis-based medicines are effective for neuropathic pain -- always noting the benefits have to be weighed against possible adverse effects. There’s not yet conclusive evidence that it’s effective for fibromyalgia, muscular-skeletal pain, Crohn’s Disease, and Multiple Sclerosis. But it is a new world of possibility and hope.

So, what is the next frontier in that new world?

The next frontier is not just looking at retrospective studies but going into clinical trials using compounds of very discreet molecules that we can isolate, extract and test for defined effects. Rather than the whole plant, which comprises some 700 compounds, we need to narrow our view down to a specific molecule and test it. And, if there isn’t enough of said molecule available in the plant, we need to explore how to format that molecule and produce more biosynthetically.

And these approaches are exactly what MediPharm Labs is focused on as well - it is one of their hallmark features: their emphasis on high-quality extraction, honing the extraction and isolation processes to source active pharmaceutical ingredients. If you could extract even a small quantity of something promising, and then work to structurally identify and biosynthesize it, you wouldn’t need to rely on sourcing quantities of its natural form.

This is what we talk about with the MediPharm Lab Science Advisory Committee. We’re a collection of individuals from different walks of life who touch cannabis knowledge in different ways. We’re extractors, scientists, physicians, biotechnologists, chemists, pharmacists. We have discussions that are multi-componential, from the aspect, say, of someone treating patients with rheumatoid diseases, arthritis, etc., who’s interested in knowing how cannabis might help patients, to other far-reaching areas. Take tetrahydrocannabivarin (THCV) a metabolite of THC, a cannabinoid compound that’s been implicated in the treatment of obesity4, as well as autism potentially5 or cannflavin A and B, implicated for inflammation.6 These compounds have an anti-inflammatory index that’s 30 times that of ASA7 which is the anti-inflammatory benchmark.

There’s cannabis cancer research being done to explore the anti-cancer properties of CBD. If the endocannabinoid system is expressed in every cell of the human body, the same could be true for cancer cells; the question is, is CBD effective in reducing tumors, versus just ameliorating side-effect symptoms?

The thing I’m personally interested in is the mitigation of opioid use disorder with cannabis - replacing opioids with cannabis to decrease the use of opioids. Yes, there are pros and cons to the idea, but there has been much recent recognition of the possible crosstalk between the endorphin (opioid) and endocannabinoid systems.8

We need clinical trials that help us understand whether there are medical benefits of the specific cannabinoid compounds in clinical settings. Ideally, these should be randomized prospective clinical trials for cannabis, with more significant numbers of subjects, using compounds in specific doses  and with placebo comparisons.

Isn’t the task daunting? And, do you think the world is ready for so much scientific emphasis on cannabis?

I’m not the least bit afraid of cannabis knowledge or cannabis impact. It is going to require sustained clinical research and evidence.

1Queen Victoria’s personal physician for 37 years was Sir John Russell Reynolds, who during that time used cannabis for treating menstrual cramps, migraine, neuralgia, epileptic convulsions and insomnia. In an 1890 scientific review, he wrote “When pure and administered carefully, it is one of the most valuable medicines we possess.” No-one is sure Reynolds prescribed cannabis for the queen, but chances are good that he did. (J.R. Reynolds, “On the Therapeutical Uses and Toxic Effects of Cannabis Indica,” Lancet 1 1890: 637-38.) https://www.thelancet.com/journals/lancet/article/PIIS0140-6736(02)18723-X/fulltext