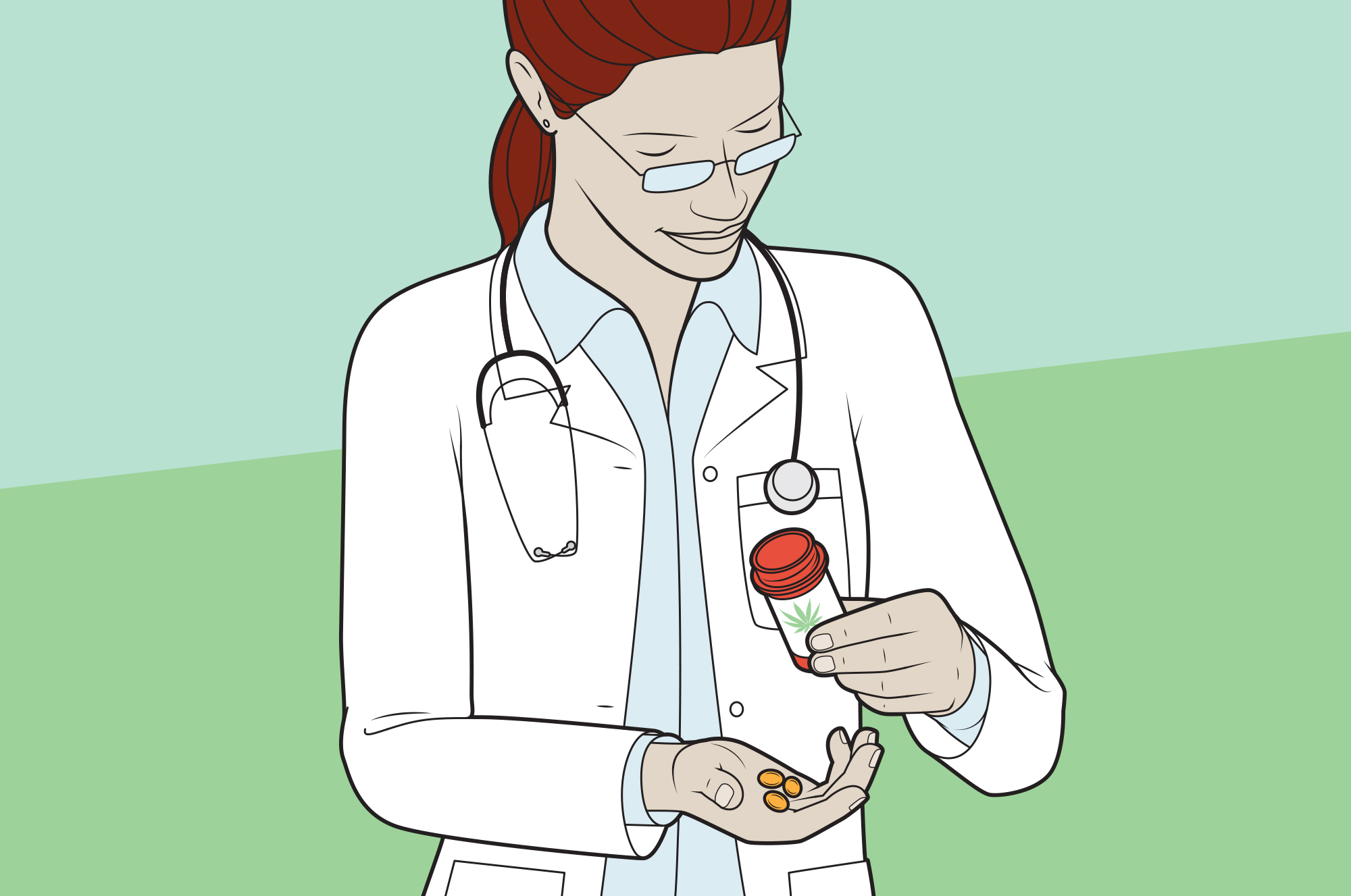 People have been using cannabis for healing for centuries, ever since the beginning of the written word.1  But it’s in this century that researchers are forging ahead with groundbreaking studies to uncover—and validate—the plant’s medical potential through an understanding of its benefits and side effects.

For those physicians who were pioneers in the emerging field of cannabinoid medicine, the validation is long overdue.

“My interest in this field came from having a lot of patients telling me that they were using it along with their standard medications for pain,” said Dr. Carolina Landolt, a Toronto rheumatologist and internal medicine specialist with a sub-specialization in the management of complex autoimmune disorders. “At one point, when you keep hearing the same stories over and over—'this worked for me, and I want to be able to get it'— you begin to think there is something to this.”

Inspired by the patient advocacy that started with the establishment of the 2001 Marijuana Medical Access Regulations (MMAR) and series of changes in the MMPR (in 2013) and ACMPR (in 2016) which ultimately led to the 2017 national legalization of cannabis, Dr. Landolt established the first specialty-run medical cannabis clinic in Canada in 2015.

Given that the data wasn’t robust in places (understandable in a once illegal substance), she basically explored its therapeutics in a trial and error process, growing and learning with her patients to create a regimen for medical cannabis usage to help manage chronic pain, inflammation and sleep disorders which were byproducts of their complex disease states.

The fact that many people, including health care professionals are perplexed by cannabis is understandable given the complex chemistry of the plant. Cannabis contains over 100 chemical compounds, called cannabinoids and terpenes, which act on receptors throughout our body.

While Cannabidiol, more commonly known as CBD (non-intoxicating) and Tetrahydrocannabinol or THC (intoxicating) are the major cannabinoids, there are minor ones like CBG (Cannabigerol) that work in mysterious ways that science is just getting to know about.

What we do know is that there is significant quality of evidence to suggest that medical cannabis may have therapeutic benefits in a number conditions. These include the treatment of, or alleviation of symptoms associated with:


A new era of testing

Because cannabis was illegal for so long, conducting clinical trials with consistently high-quality strains of medical cannabis was challenging for many researchers. In some cases, this has resulted in flawed data, according to Dr. Hance Clarke, Director of Pain Services at Western Hospital and a key opinion leader in the pain management area.

“While cannabis has always been part of the pain world, one of the big problems is that its usage has often been viewed through a recreational lens,” he said in an interview with The Canadian Journal of Medical Cannabis. 7 “This is particularly true when it comes to studies examining medical cannabis as a possible medication that can be used to help people wean off opioid medications.”

Dr. Clarke is about to redefine medical cannabis testing as the lead on The Medical Cannabis Real Evidence (MC-RWE) clinical trial. This landmark trial will allow patients to select medical cannabis products that are tested and tracked [through blockchain technology], from seed straight through to packaging.

Over a 24 month period, 2,000 patients will report their use and deemed benefits and side effects on the clinical trial portal. To know exactly what is in their products, how many milligrams of THC and cannabidiol are being consumed and if it works for them, patients are using a novel online portal created for the sale of medical cannabis by the Canadian retail pharmacy chain, Shoppers Drug Mart. If they find the product does work for them, they can rely on the product being exactly the same, from batch to batch.

A major goal of this study is to apply the same rigorous clinical trial standards around medical cannabis that are demanded of any other pharmaceutical product. This will help provide a much needed national repository of data that can help physicians prescribe the appropriately validated product at the right dose for the right patient and medical indication.

Despite the myriad of potential benefits science is uncovering daily, medical cannabis, like any medicine comes with risks, and is not for everyone.

“The fact that cannabis is a natural substance and its use is becoming permissible around the globe should not be sufficient for people to think it is harmless,” Dr. Pauric Bannigan, PhD said in an article for Cannabis and Cannabinoid Research.8

Possible side effects include cannabis use disorder/addiction, cognitive impairment, motor impairment, euphoria, psychosis, anxiety and depressive orders among others.8

Cannabis also should not be combined with alcohol, sedative medication or other drugs with known interactions with cannabis including but not limited to anti-depressants, antacids, calcium channel blockers used for high blood pressure and heart disease among others. 9

There is substantial evidence of a statistical association between long-term cannabis smoking and worsening respiratory symptoms and more frequent chronic bronchitis episodes. As well, long-term and intense cannabis use can lead to cannabinoid hyperemesis syndrome, a rare condition that involves cyclic nausea and vomiting.8

“In rheumatoid arthritis (RA) for example, there are a lot of good treatments such as biologics that work for the bulk of the problem,” she said. “Medical cannabis is not going to replace a biologic. Having said that, there are a lot of people with well controlled RA who still may have a sub-component of pain and discomfort, with some days worse than others. These people might take medical cannabis in the same way they’d take Advil or Naproxen for relief.”

Cannabis chemistry may be complex, but navigating it relies on a simple, time-worn principle—talk to your doctor.

“Medicine is about understanding what you’re doing and why you’re doing it,” Dr. Landolt said. “And some patients can try many medications before they find the right combinations. Every time you take a medication, you’re running a bit of an experiment. When you start a medication for a specific condition like arthritis, you re-evaluate its effects and side effects. And it’s no different for medical cannabis—you are coming from a position of knowledge, but you are always re-evaluating.”

Like most medical experts, she stresses the need for education for both patients and physicians. Moving into a new era of cannabis testing, with long overdue, real-world data should help.

Dr. Landolt-Marticorena is trained in internal medicine and rheumatology with a sub-specialization in the management of complex autoimmune disorders. Dr. Landolt-Marticorena completed a Research Fellowship and Chief Residency at the University of Toronto, and as a clinician-scientist, authoring multiple highly cited publications. She has held appointments at numerous Academic Institutions and Research Hospitals, garnering national and international awards at every stage of her career.

In 2015 Dr. Landolt turned her focus to the emerging field of cannabinoid medicine establishing the first specialty-run clinic in Canada. Her practice focuses on the use of cannabinoids in the management of chronic pain conditions including degenerative and inflammatory arthritis, musculoskeletal and neuropathic pain and fibromyalgia. She has developed a unique expertise in this emerging area of medicine and is a sought-after academic speaker and public media expert. She is committed to developing accredited training programs for physicians and allied health care personnel, including for University of Toronto Mitchener Institute, while also practicing Internal Medicine at Thunder Bay Regional Hospital and serving on the Cannabis Medical Advisory Board of Shoppers Drugmart.